Well I made it! I admit I wanted to cheat a few times and really go off course but I stuck with it and I feel FANTASTIC.

I am down about 10 pounds and counting and now have the motivation to continue on this fitness journey.
Please read my other blog posts for the full story of the detox journey in the first and second weeks.

Weight loss was not my primary goal. I've been on a mission for better health and wellness for a long time and I am serious when I tell u that a good cleanse or purification program is the Holy Grail for wellness and weight loss. The most remarkable changes...

Of course I ate very clean for the whole 21 days. I also took my supplements.

Going forward I plan to stick primarily to a paleo diet
and workout doing Slow Motion resistance training along with interval cardio (Sprint 8). There are a few good articles on Dr. Mercola's website about this kind of exercise.

All content on this site including health and wellness related content is completely my opinion. As frequently as possible I will provide references for any information relevant to health and wellness statements. Be Well, Crystal
Posted by Unknown No comments:

Hard to believe I stuck with it this long but I did! I just have a few notes on my progress.

1. Tracy said I would feel great by day 15. It was sooner than that. I have had mental clarity, energy and a great mood for the last several days. I have also been really motivated in the gym and feel like I have more stamina.

2. The colonics are a MUST - for me its been tough to drink enough water, take enough magnesium or mild laxative herbs to really get my colon cleaned out. If you do this and you don't want to get backed up with all the fiber, I highly suggest colon hydrotherapy.

3. If you are not a vegetarian or a chef, finding ways to keep the food interesting may be a little tough as well. I found myself getting really bored with smoothies and stirfry. I found a great show on PBS Christina Cooks - and her website as well with really good looking recipes. And she explains the benefits of the food choices on the show too.

4. I have added some nuts to the menu and ate 3 tacos for dinner one night. Aside from that I've stuck fairly close to the foods prescribed by the program. I also had not mentioned previously the supplements I'm taking and I highly suggest. This may be part of the reason I'm feeling so good. I will add links to each specific product I'm using but you could choose your own.

I know this may seem like a lot of supplements. Ok it is.  But there are specific reasons for each one . Interestingly I have not taken a regular multivitamin during this time. But I do use greens powders in my smoothies.
I'm not trying to lose 20 as some people can but I have lost some and will post the total on day 21.
Posted by Unknown No comments:

If you know anything about detoxing or purification, you know the beginning is hard. As the body begins to draw toxins from the tissues and organs, it really feels bad.

For  me, the first four days were a little rough, not so bad I couldn't function but I felt pretty lousy. Headaches and nausea mostly along with watery eyes and fatigue. It almost felt like the "hangover" I get from eating gluten. Or like the beginning of my seasonal allergy symptoms. By day 5 I was feeling much better and by day 7 had no "detox" symptoms at all.

Today is day 9. I'm getting tired of only eating veggies. I use some fruit in my smoothies as well. Ive had brown rice a couple of times and yams or sweet potatoes as a "dessert" a few nights. Although I feel better, I'm having a hard time being satisfied by the food I'm eating and seem to be hungry a lot. In fact I'm hungry right now. I'm not calorie counting - the protocol is that you can eat unlimited amounts of vegetables. It's just that I get full but am hungry again a short time later when it's not convenient to eat. I have not figured out how to get past this issue. I've lost about 5lb which is a bit surprising even though the program boasts a 20 lb potential in 21 days. I've also been working out at the gym a few days a week. 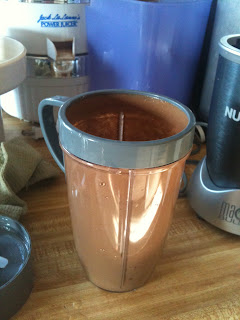 I was craving chocolate today so for lunch I made my smoothie with cacao nibs, Chocolate Raw Perfect Food (Garden of Life) and dutch cocoa along with frozen berries and spinach. I don't know if that was legal but....It was goooood!

I'm also craving meat but I'm holding out till day 11 - just need to make it thru one more day.

One thing I noticed was that I felt much, much better after getting a colonic or colon hydrotherapy.I guess flushing all the toxins out of the colon is a good idea so they don't circulate back into the blood stream and get re-deposited in the fat tissue and organs.
Also, making the SP Complete shake with fiber in the vitamix is not good. Its better to make it in a blender bottle or in the blender on a very slow speed. I'm also not sure if I like adding it to a smoothie or just adding it to water and drinking it plain and just getting it over with. I think just getting it over with is a little better.